Why Do We Practice Asana as Part of Yoga?

Q.
“I was pondering a question about asanas, and can you still do the meditation practices without the asanas, for example, if your body could no longer do the physical movements? And, if the answer is yes, what, if anything, is the body missing?” 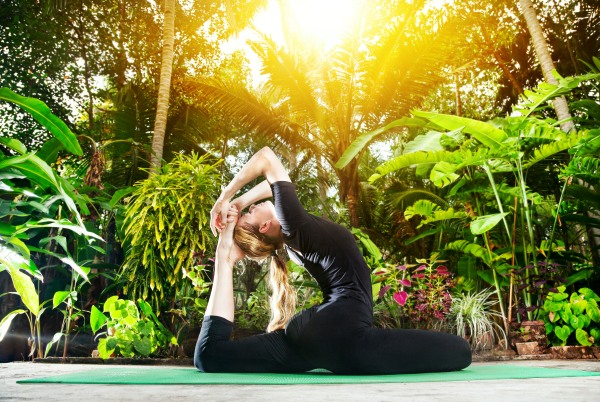 So, looking at the question; if the answer is “yes”, if they can just practice meditation without asanas, then what’s the body missing? What are we missing out on, by not practicing asanas? So, asanas, is, they’re part of the yogic path. They’re one of the eight limbs of yoga. If you look at Patanjali’s breakdown of yoga into into eight parts, asana is defined as one of those parts. And it brings something to the practice. And it does that because of the way that it purifies the subtle nervous system. And so, if we understand how asana works to purify the subtle nervous system, then we can understand why we have all these quite random collection of poses. You know, it’s not just about stretching the body, so that it makes it easier to, and more comfortable, to sit in meditation. So, if we’re looking at how asana works to purify the subtle nervous system, there’s various principles involved. And so, the main principle involved in asana practice, is the principle of stretching energy channels, or stretching nadis. As we stretch a nadi, it causes more prana to flow through it. And so it increases the flow of prana in the body. And as the flow of prana increases in the body, the subtle body is purified more and more. And because the subtle body is intimately connected with the physical body, if we stretch the physical body, we’re stretching energy channels.

So, you can look at an asana like upward facing dog, and you can look at what it’s doing in the body, and it’s stretching the sushumna nadi, the central spinal nerve, and it’s also creating an expansion across the chest. The head’s coming up, there’s an expansion across the throat. That expansion combined with that stretch of the spinal nerve, will cause the heart chakra to purify, cause the throat chakra to purify, and it’ll actually cause the third eye to purify as well, as the prana flows up. We see a similar effect happening with fish for example, matsyasana. The heads right back, the chest is right up, the spine is stretched, the spinal nerve is stretched. So, it’ll purify sushumna, the central channel, and again heart, throat, and ajna. If we look at a asana like sitting toe touch when both feet are straight out in front, we’re bringing our hands towards our feet. This is activating the energy channels in the legs. It’s also stretching the spine, activating sushumna, the central channel, and it activates all of the first six chakras, all the way from root up to the third eye. So it’s a really powerful asana.
If we look at something like plough; so, there’s another principle involved, which is the principle of inversions. So, we’ve got full inversions and semi inversions. When we bring the body upside down, blood moves towards the head, and it actually carries prana with it. And so that’s why inversions are so important in asana sequences. When the prana flows towards the head, it carries prana to the higher chakras, activating those. So if you look at an asana like plough, it’s basically the same as sitting toe touch, except it’s upside down. So you’ve got all the same things happening in terms of purification, as you do with sitting toe touch, but you’ve also got that inversion; prana flowing towards the head, more activation of the of the higher chakras. That doesn’t actually mean that plow is a more effective asana than sitting toe touch. Sitting toe touch can have more of an effect on purifying the energy channels in the legs, and the root chakra, so it can actually be a more effective and powerful asana than plough.

And so, another way in which we can stretch nadis is with twists. When we twist the body to one side, or another side, we’re actually activating the side channels, ida and pingala. Ida and pingala move up through the body in a double helix formation, with one of them going one way around sushumna and the other one going the other way around sushumna. When we twist the body, it’ll activate one or the other of these side channels depending on which way we go. So, asanas like triangle, trikonasana, actually activate ida and pingala. And when there’s prana flowing through ida and pingala, and they come into balance, it brings prana into the central channel, into sushumna. And so, we have the same effect with something like supine twist, when we’re lying on our back, bringing our knees to one side, or the other side. And the same effect with half spinal twist, ardha matsyendrasana. So these are, you know, really effective powerful asanas in terms of purifying the subtle nervous system.

There’s another principle, which is to do with opening the pelvis. And so you’ve got asanas like butterfly, baddha konasana. And, when the pelvis is being opened, it has an effect to activate the first and second chakras. So, the root chakra and the swadhisthana chakra. And, you have got a similar effect with asanas like warrior, you’re activating the root chakra and also anjaneyasana, the victory pose. And, when the root becomes active, it causes prana to flow right up through the body, up through the spinal nerve. So that actually has a kind of knock-on effect, to other chakras in the body. And there is a kind of opening that can happen across the top of the pelvis. So if you look at a pose like reclining hero, or supta virasana, you wouldn’t really say that the pelvis is being opened, but there’s an extension happening across the top of the pelvis, which also causes the root to open, and the sacral chakra, the second chakra, to open as well.

And, another principle is pressure. What happens when we put pressure on certain parts of the body? This can also activate chakras, causing prana to flow in certain regions. And you get this happening in asanas like bow, when we are on our belly and we’re holding both feet with our hands. That, the pressure is on the belly region, and it actually causes the second and third chakras to activate. And so, that would be different in a practice like wheel, or chakrasana. So, chakrasana is, you’re doing a similar thing in terms of the way the spine is being extended. So it’s similar to bow, just upside down, but the way chakrasana works, it doesn’t have that same pressure on the second and third chakras. So, wheel, or chakrasana, actually activates all the chakras between the first and the sixth. Between root and ajna.

So, another principle, is the principle of jalandhara bandha, what happens when we bring the head down? And this has the effect of trapping prana in the torso, but also causing a very refined, very fine flow of prana to come up into the higher centers, through brahma nadi. So, if we look at practices like plough, halasana, that build up of prana in the chest, which will cause the heart chakra to activate. And the same thing happens with bridge. Same thing with shoulder stand.

One more principle, is the principle of connecting chakras. And, in asana, we don’t often connect chakras, but it does happen in some cases, especially with the hands, when we bring the hands together. So, there are minor energy centers in the palms of the hands. These are connected to nadis that run up the arms, connected to the heart. And when we join the hands together, it sort of creates an energetic closed loop, so that the prana is running through the hands freely, through the arms freely, and into the heart. So, you get this in asanas like warrior one, anjaneyasana, namaskarasana when we bring our hands into anjali mudra at the heart. So if we’re bringing our hands together at the heart, we’re actually connecting three chakras. We’re connecting the two minor chakras in the palms of the hands, and we’re connecting them to the heart. So that’s not just an expression of respect. That’s also, we’re also doing something energetically with the body in terms of purification.

And so, the last principle I wanted to mention, was the principle of grounding. So, some asanas are grounding. So, if you look at something like balasana, or child pose, when we touch our forehead to the floor, that has a grounding effect. And the same thing happens in shavasana, corpse pose. That’s grounding and it’s also balancing. It balances the flows of energy out in the body, which is why we always do it at the end of an asana sequence.

So, these are all the different ways in which asana purifies the body, and it’s why asana is one of the eight limbs of yoga. People talk about it as preparation for sitting practices, which it is, but we’re not just preparing to do yoga. We’re actually doing yoga, when we do asana practice. And so, it’s a very beautiful thing. And there’s a certain stage on the path, where you begin to feel these things. You begin to feel the prana flowing through the body, you begin to feel the chakras opening and activating, and you feel the difference between when you begin the asana sequence, and when you come into your meditation. You know, there’s a profound difference, and it affects the quality of the meditation. The quality of the meditation will be very different.

And so, if we’re looking at asana practice from the point of view of AYP, so this is a quote from Yogani from lesson 71. He writes: “Asanas, in the traditional sense, are for quietening the nervous system. But more than that, they are designed to facilitate the flow of prana in the body, particularly in the sushumna, the spinal nerve. So, you can see that this makes asanas an excellent preparation for pranayama, for spinal breathing.” And then he goes on to write: “Yoga asanas begin to take us from physicality to more subtle experiences of divine energy in the nervous system. This is why asanas are so relaxing. It is their main draw.” So, you can see, you know, the more we practice asanas, the more we begin to feel these movements of prana in the body, the more it brings us inwards. You know, we’re brought inwards to these subtle experiences. And so, when we enter pranayama, or enter meditation, we’re already in that state of pratyahara. And I wanted to read out one more quote, which comes from the Hatha Yoga Pradipika. This one is chapter 1, verse 29. And so he’s writing about sitting toe touch. So, he says: “Sitting toe touch is the best among asanas. By this asana, the pranic currents rise through sushumna.”. So, this is a 500 year-old text. And he’s looking at, you know, which is the most effective asana, in terms of how it causes prana to flow in the body. You know, so he’s saying that this is the most effective asana. He actually then goes on to say that siddhasana is the most effective asana, also because of the way that it causes prana to flow in the body.

The next residential retreat with Tristan will be taking place in Devon, England in October 2022. Full details are here.
More Information Opens in a new tab